When you get something done that you didn’t have planned? Always a great feeling.

Over the holiday weekend, Dan and I very much enjoyed the rainy 4th. Why, you ask? Well, when it rains one has less guilt about the long list of projects staring one in the face. One can say, “Oh gee, well would you look at that, I can’t work in this rain! Guess I will just sit back, relax, and catch a movie or something equally passive.” haha 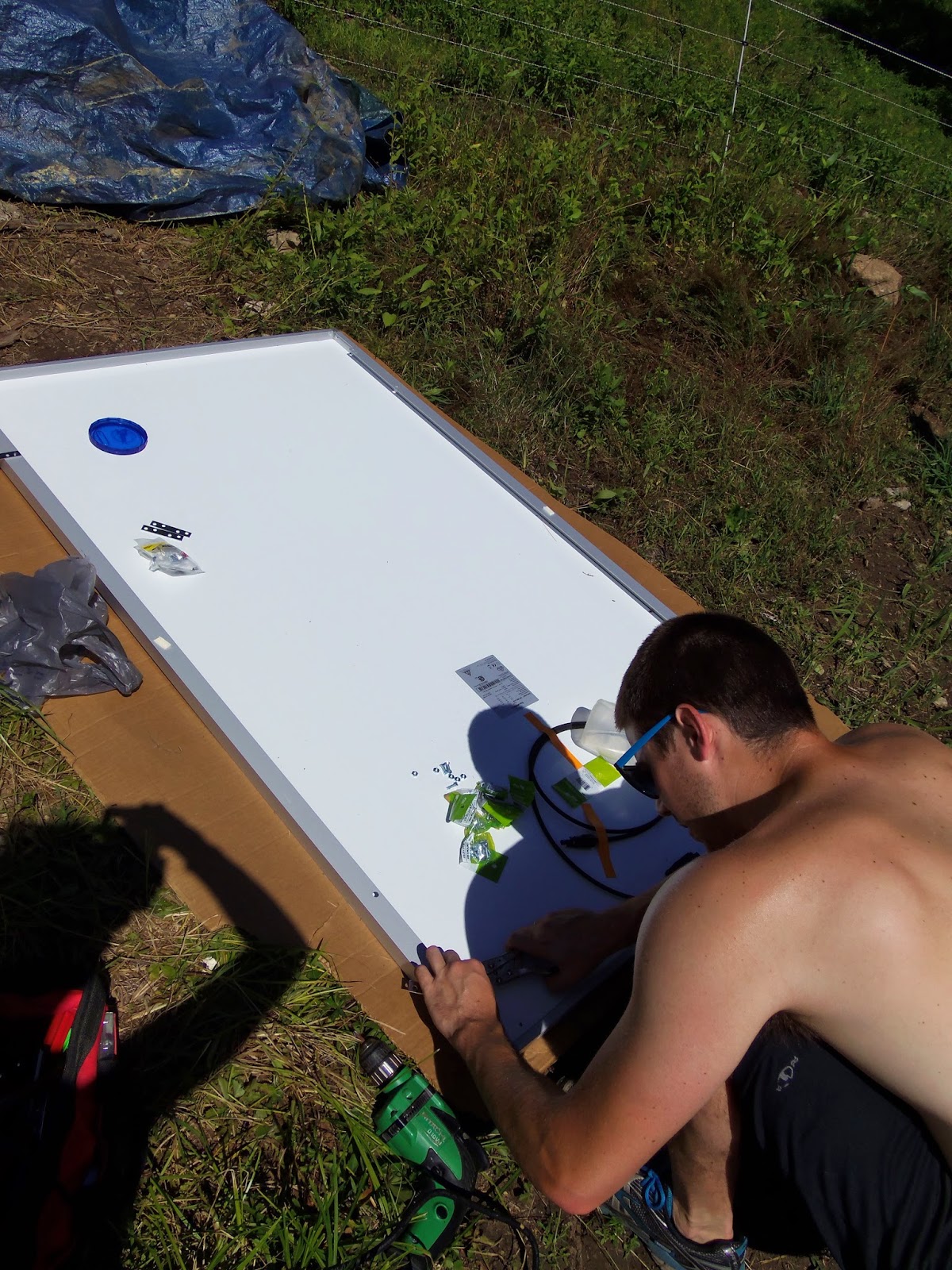 And that we did! –At home. Apparently we weren’t the only ones who thought it would be a good day for a movie. We went, saw the the massive line, and after waiting just 3 minutes we heard a staff member call out, “Maleficent is sold out!” So, we headed off to do some other errands that had been adding up, then enjoyed a movie at home.

We didn’t set our sights too high for the weekend. We have both been feeling the burn out set in. It’s been over a solid year of working almost every last weekend and several, several weekdays of putting in the full 8.5 then coming home and putting in another 3-4. It’s beginning to catch up with us! I’ll admit, I’ve had more than one semi-melt down day in the last month or two. A break is much needed. But the end is in sight! 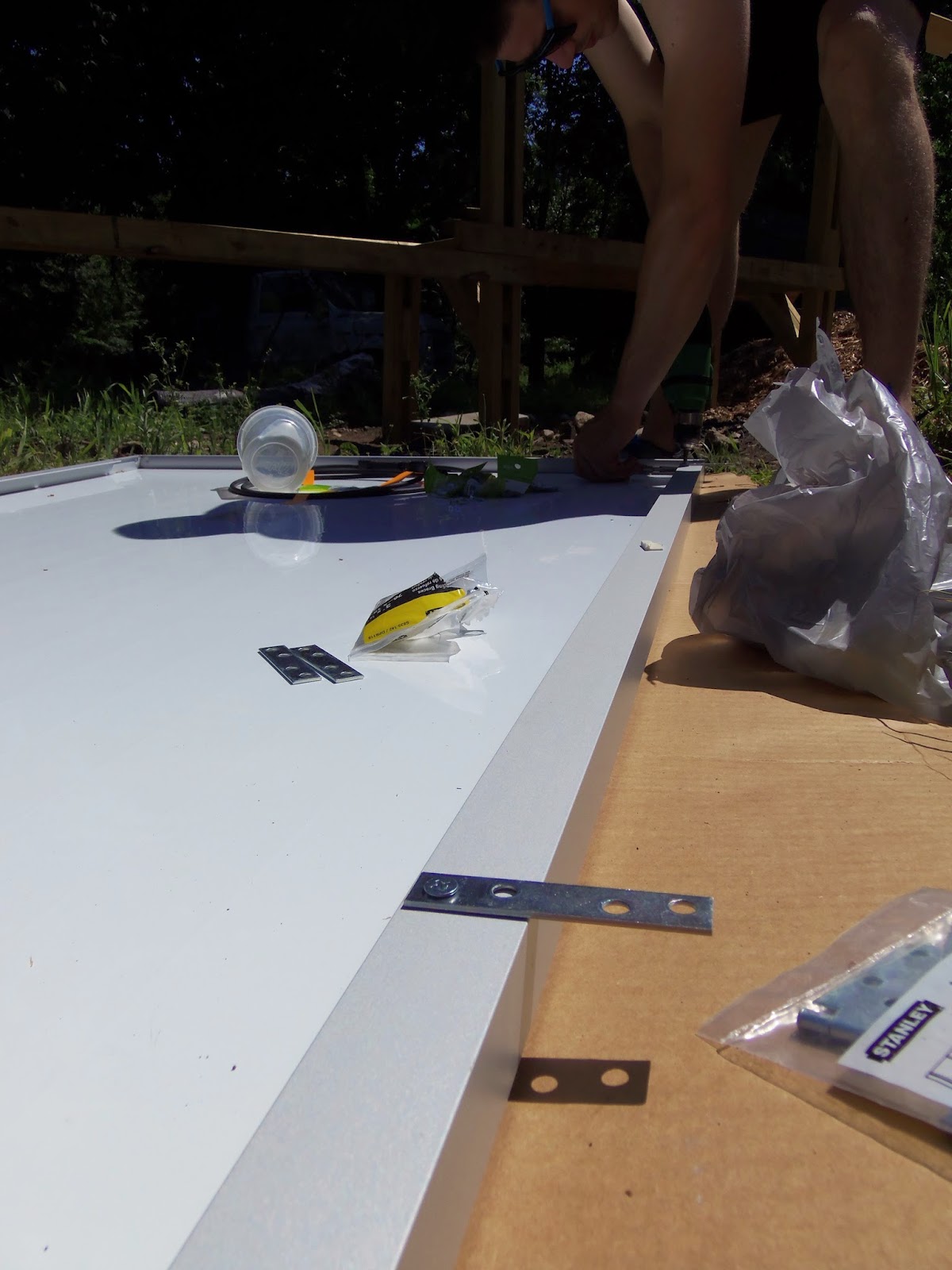 Neither of us expected we would get the panels up over the weekend. There was a lot to be discussed and figured still. Or at least we seemed to think so. But on Saturday, as we puttered around, unpacking this, tidying up that, we kept staring at that stack of panels. Finally, we made our way over and started to discuss the strategy we had for mounting them. We leaped from one alternative to another, only to end up back at the same idea. The truth is, you can talk in circles all day long or you can just DO IT. Then learn from the doing. 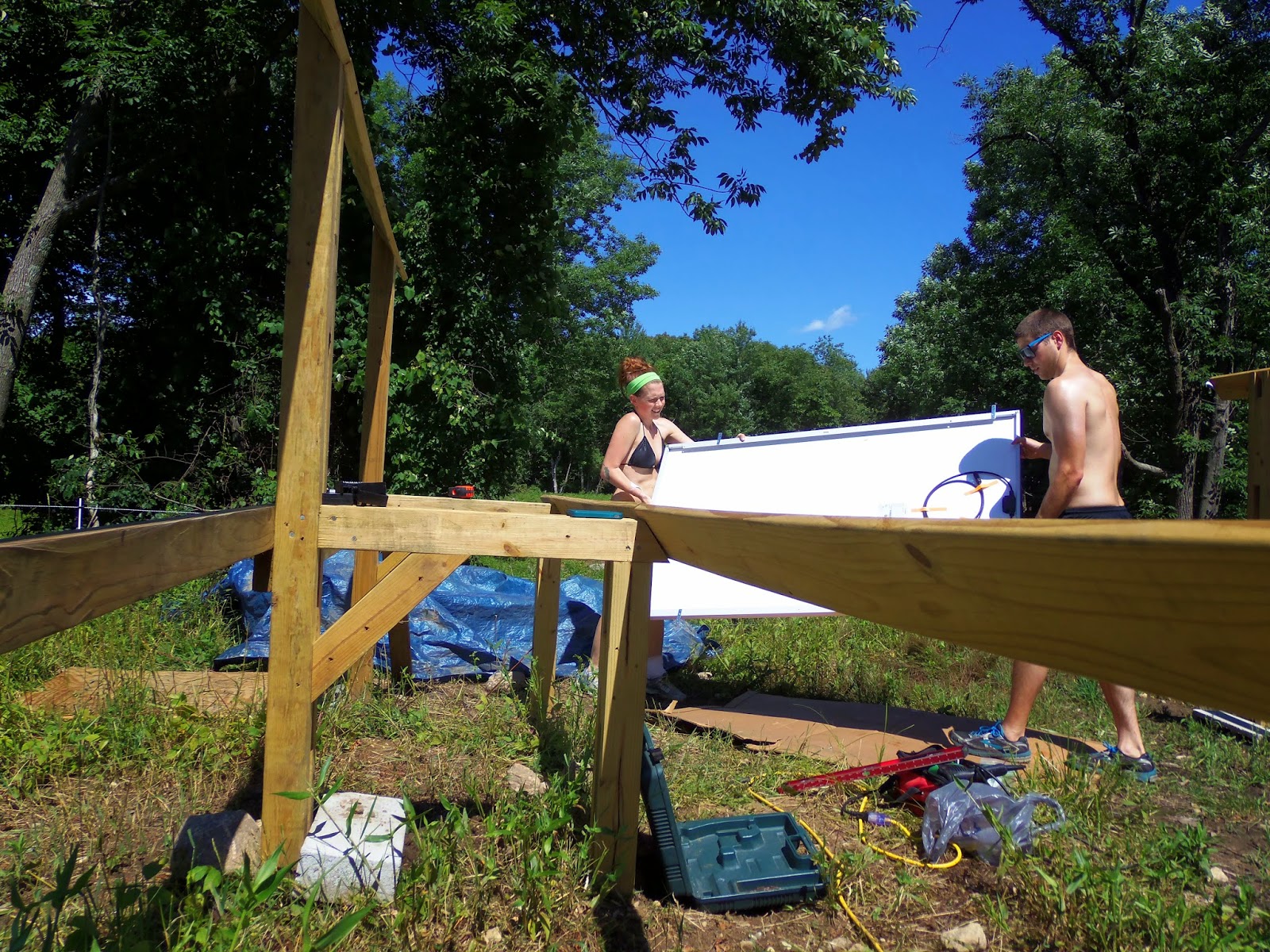 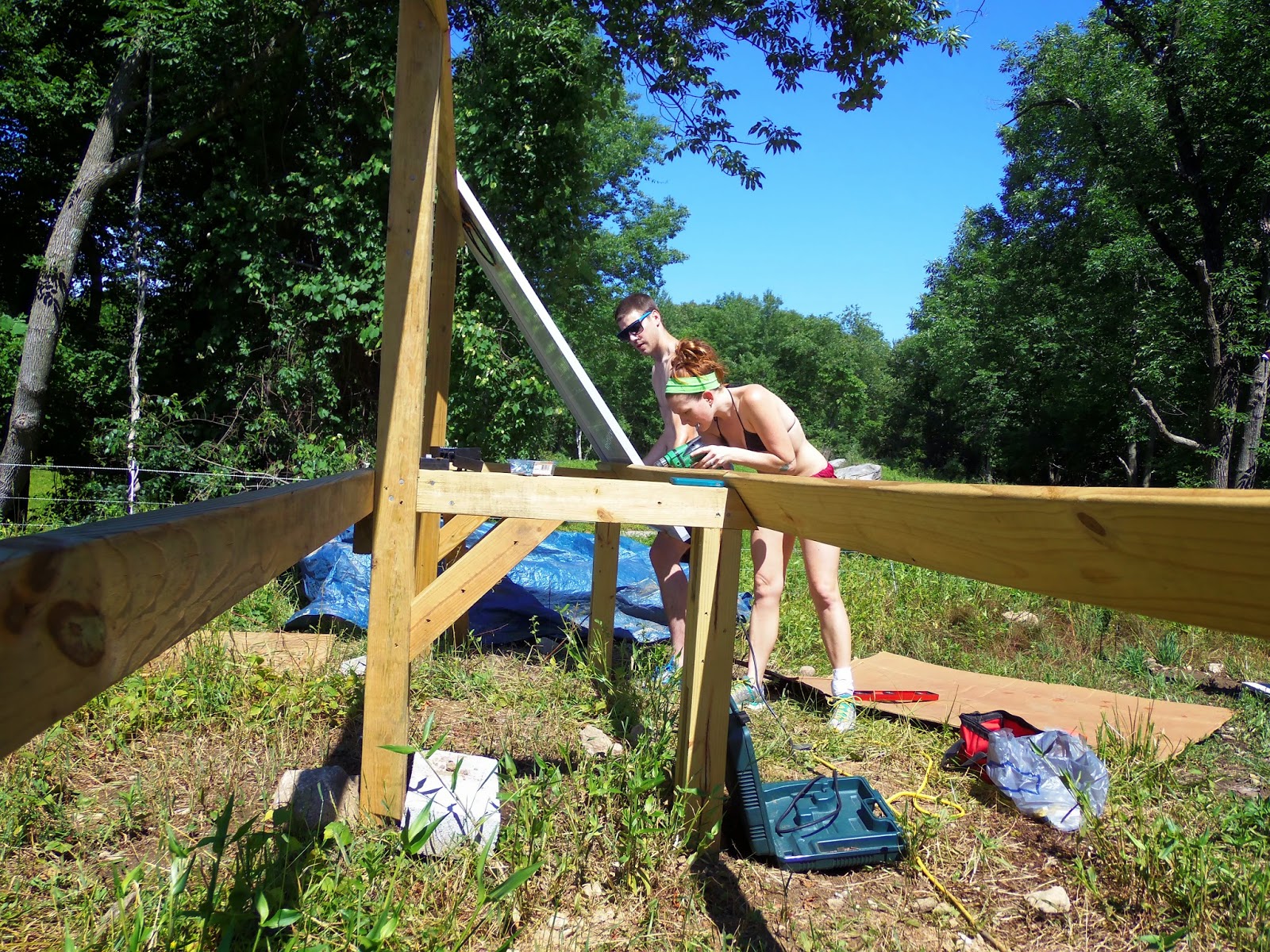 “Let’s just try putting up one and see how it goes,” I said nonchalantly, and thus the panel mounting began. We opted to use flat brackets, about 3 inches long with four different holes. There are only 4 holes to choose from on either side of the panel itself, so we had made our racking according to those lengths.

First we secured the brackets to the back of the panel racking with the bolt and nut facing up into the gap created by the frame of the panel- that way, when placed onto the racking, that bolt head was flush with the panel’s frame. Once we had the panel in place, we used large wood screws to secure the bracket to the racking. The first one went up rather easily, as did the second, so we just kept going! 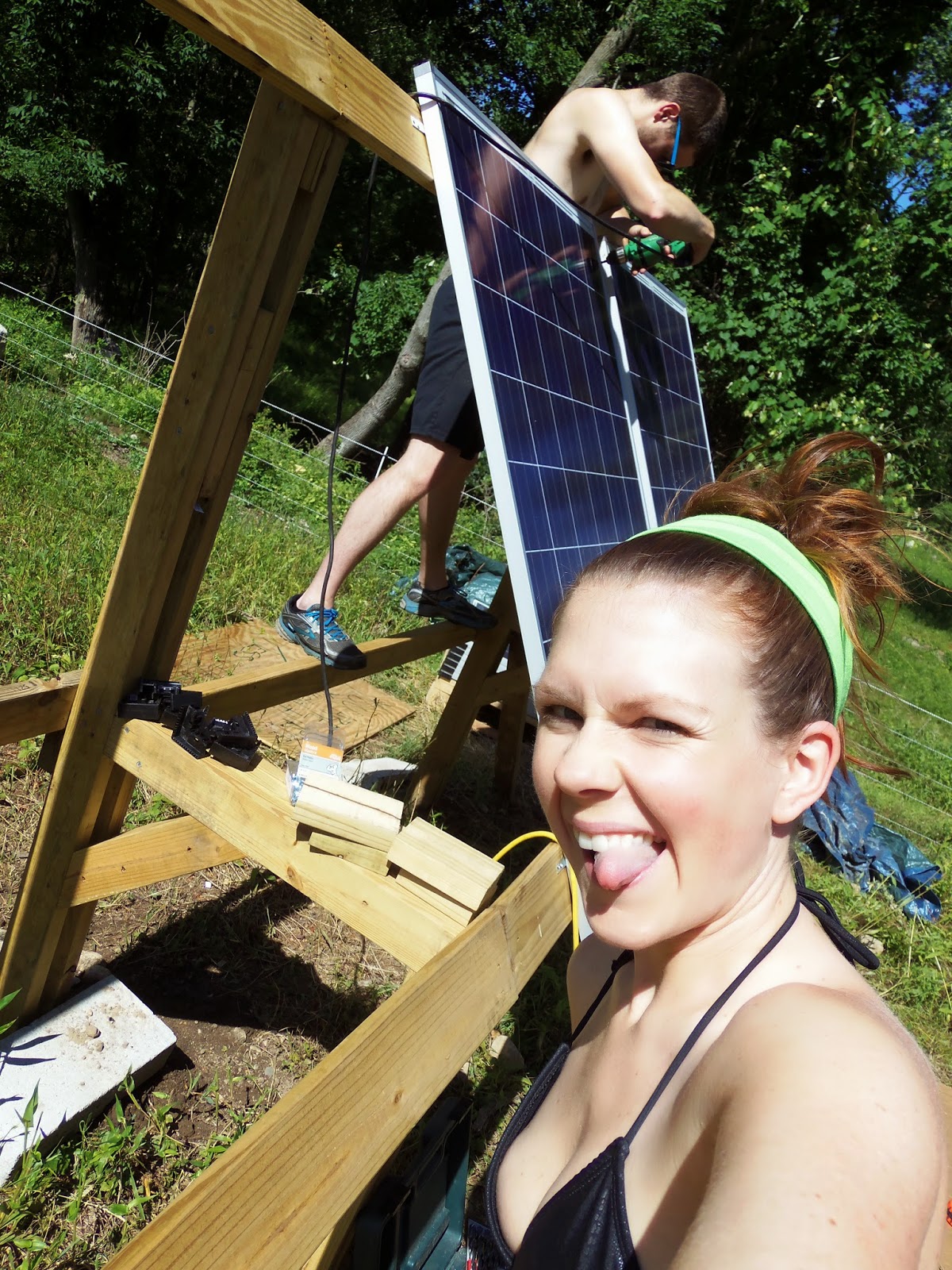 Due to our method of securing the panel, we had to have about 3-4 inches of space between each panel, so there was space to screw down the brackets. We alternated the height of the panels as well so the brackets of two adjacent panels could set under or above one another- otherwise the gap would have been larger if we kept them all at the same height and had brackets butting together.

Our two rows of racking are not symmetrical by any means either. We had to dig our post holes where we could manage to make holes period. So, we opted to leave a larger gap in the center of the back row, so as to sort of center the panels on the rack and also provide a nice opening for wind to come through- thereby reducing it’s impact on the panels. The front row of racking is shorter, so we kept the same spacing all the way across. 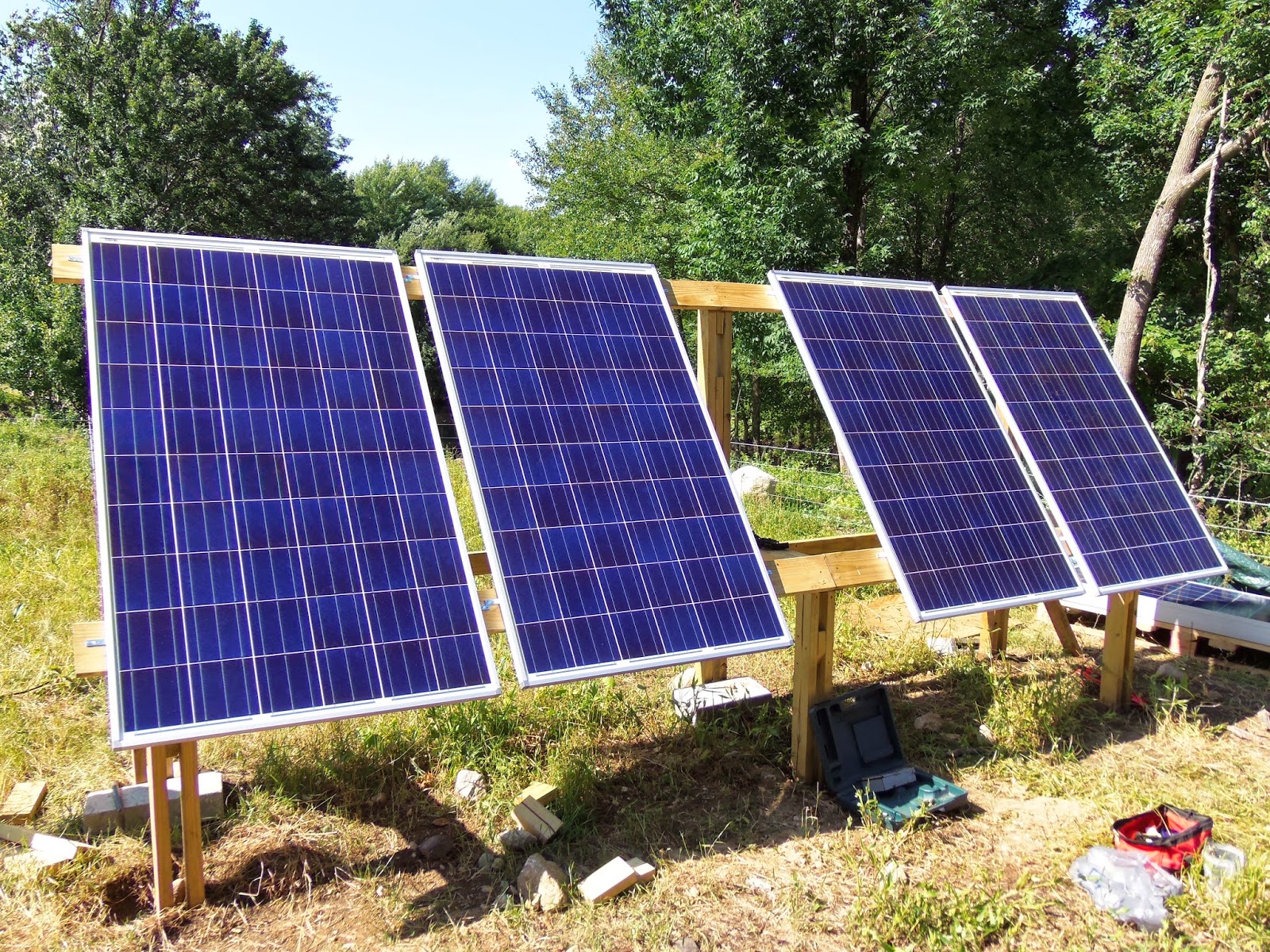 We had all but two of the panels up by the end of Saturday. We needed more hardware to finish the job, so we called it a day. We stood back and admired our work. No, they aren’t the picture perfect solar arrays you see in magazines where every last panel is immaculately lined up, centered, and even every which way. They are a little off here and there, like their owners. 🙂 Last I checked, the sun still shines just as well on panels that aren’t perfectly pretty in a row- as long as they are pointing at the sun!

Remember, you want lightweight and high strength for the backbone of your Tiny House on Wheels project to keep the spirit of the Tiny House RV alive.

Here are links to some lightweight camper trailer manufacturers for your research:

Keep us posted, tell us your story of your camper trailer conversion, and if you find additional trailer resources that we missed, give us a head’s up and we will update this information.

With 14 titles all rolling off the shelves at brick and mortar bookstores and online retailers like Barnes and Noble and Amazon, somehow author Jobe Leonard still wanted more. This time he digitized the estimation process for construction of Tiny Homes.

“I have always lived in a tiny home and preached the benefits both financial and mental,” says Jobe. “Most people who see a tiny home immediately want one. It reminds them of simpler times with less stress, bills, and material possessions. However, no one has ever been able to pinpoint what it costs quickly and easily.” With that motivation Mr. Leonard set out to change the rules of Tiny Home estimation forever. The basis for his new software to help prospective Tiny Home lovers was set.

The App Jobe created has taken the Tiny Home world and opened it up to hundreds of thousands of individuals who never knew where to begin. After over a decade of building Tiny Homes made specifically of timbers harvested from sustainable forestlands, Mr. Leonard went harnessed his inner creativity once more. He created not only an App specifically for the Tiny Home Movement, but also a 200+ page workbook available in paperback, Kindle, and I-book. His work has consistently topped the charts for all “Architecture” books around the globe, not just the Tiny Home niche’,

Mr. Leonard undoubtedly will not stop here. He has 13 more Apps in development and 6 more titles on the press. One thing is for sure, there is never a dull moment in the Tiny House of author, builder, and tech developer, Jobe Leonard.

What do you get when you embark on the shipping container home journey?

After you receive your shipping container, you will have it inspected (or not) then clean and prep your container and make sure it is water-tight.

If you want something beside barn-door-style entry at one end, you will have to get a metal contractor (unless you possess these skills) to cut door and window openings in your container.

If not, you will need to put up walls… and it is likely that you will want some insulation, too.

As an alternative to re-fabricating a used shipping container… Why not start with a brand-spanking new Sing Container Home Shell?

The Sing Container Home Shell comes in the same dimensions as the standard shipping container sizes and is built completely of insulated Sing Sandwich panels. All door and window cutouts are pre-cut to your specifications.

Exterior finish is your choice of aluminum or FRP and interior is Luan plywood, ready-to-decorate to your heart’s content.